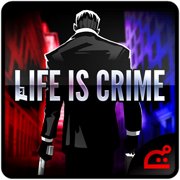 Here is something for all the action lovers who get enticed with the thought of owning their own Mafia family. Well, we are talking about Life is Crime and this is an Android exclusive. The game is very much like Zynga’s Mafia Wars, but this one uses GPS coordinates for awesome realism and action.

The game is the only release from the Red Robot Labs, but keeping in mind the execution level given to this title, the future updates/games are something to just anxiously wait for.

The game says: “Real Places. Virtual Crime”, Life is Crime is the first ever, location-based RPG game for Android. This means, the game and all events take place right in your real-life street/city/neighborhood. Wow, the feeling of playing in your own city and owning the turf is just awesome and mind-blowing and Life is Crime, provides players with exactly that feeling. So, unlike other mafia games where players randomly go and beat-the-hell out of rivals, this game gives player the opportunity to fight for their own turf.

Players can dominate real coffee-shops, malls, multiplexes, international airports, local restaurants and everything that does business within the players actual vicinity. So this game actually transforms a normal, real-time neighbourhood into a full-blow criminal turf. Committing virtual crimes in real places.

Players are given a plethora of options, with over 200+ ammunition, gear and items to choose from. Further, players can unlock a multitude of achievements, segregated into Gold, Silver and Bronze. To earn a quick buck, players can drop off packages at real locations and bring the dough in.

No game is complete without brutal competition and in Life is Crime, players need to fight off with rivals who have their eyes set on the same places as their. To make the clan stronger, add more friends and become a living legend in your own neighborhood. The extra realism comes from the Street Map. This map keeps growing with increase in player interactions and gameplay.

Missions are a plenty and can be completed at local businesses such as coffee shops, gas station, eatery and the likes. Missions concerning “Rob Bank” can be completed at any bank available in the area and city. Further, players need to fight hard and become notoriously notorious within their area, not only to dominate, but also keep the reputation high among the rival mafia.

The game is a very different concept and breaks-away from the conventional RPGs witnessed off late. Adding the players own city or area via GPS with points of interests really heightens the gaming experience and makes the player feel, he/she actually dominate their own neighborhood. A great concept with great thinking. Must try for Android users.