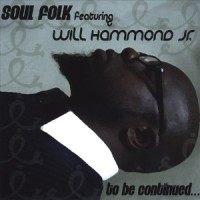 Neosoul progressive tracks with a touch of funk. Will Hammond Jr. likes to put on his sunglasses as he transforms into his alter ego, Soul Folk. Hammond is best known as a singer/songwriter who helped pen the Billboard hit for Tara Kemp, “Hold You Tonight.”

With the success of his songwriting prowess proven, he moves on to recording his own tracks and debuted his first album Soul Folk Continued in 2004.

Citing musical influences such as Erykah Badu, Stevie Wonder and Omar, it’s undeniable that Soul Folk definitely has talent for crooning soulful tracks.  Born and raised in the San Francisco Bay Area, Soul Folk grew up getting acquainted with music through church choirs and band performances including a stint in theater.

As mentioned, he helped co-write a track for Tara Kemp while he was still studying music. The track “Hold You Tight” went on to reach the Billboard Pop and R&B Charts, peaking at #3. The track also become a certified gold single, moving about 800,000 units.

His first project, “Brothafromanuthaplanet” earned him a nod from the 2004 California Music Awards. Soul Folk Continued is his follow up and from the looks of things, he still has it with him. The album is filled with 17 tracks along with some extras that showcase Hammond’s talent for writing catchy lyrics and incorporating it with easy relaxing beats. “Jaded” is a beautiful and sexy song that is perfect for a quiet evening with your partner. On the other hand, tracks like “Your Love” incorporates a more uptempo funky beat.

Although the album isn’t exactly awesome, most of the tracks from Soul Folk are definitely likable. Some tracks are indeed worth playing in iPod over and over again.