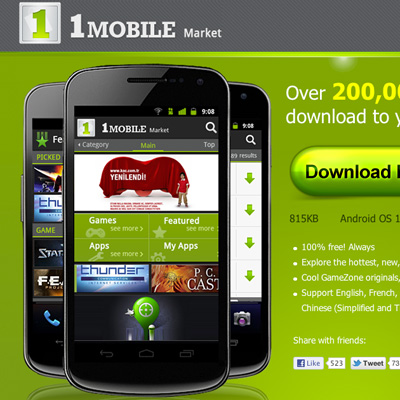 1Mobile a global leader in software stores for smartphones and other devices has created an Android app to browse, search and download apps from their internationally curated catalog.

Unlike other market apps, 1Mobile has a dedicated team of professional editors looking to provide users with a convenient, reliable, and rewarding experience throughout their use of 1Mobile software purchases and download services.

However, unlike Google’s Android Market the app selection is quite different, and feature-wise it’s also different.

It has something we didn’t see on the Android market, “Related Articles”, something that shows the editorial muscle 1Mobile flexes over Google’s (which lets a lot of clueless users speak nonsense while not letting developers explain things to users, something that make apps and developers look bad in front of potential new users).

Having both things (user reviews and editorial reviews) would be the sweet spot for an Android Market and it seems like 1Mobile will be more likely to let users add their own reviews than Google having an editorial team.

The app is very well finished (coming from us who know a little bit about Android development), it’s very intuitive and everything works as expected.

For example there’s an emphasis on video games that have a more Asian flavor to them than the ones we notice on the Google Android market.

We noticed a very good looking game that we should have a review for in the future, Baseball Superstars 2012, a game that claims to have 30 million downloads and that’s nowhere to be seen this week on the Google Android Market.

This is the beauty of Android, choice, and this app and 1mobile.com are now two new sources of free and legal content we’ll keep an eye on to keep bringing you reviews of the best free content available on the internet.