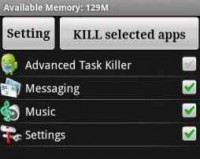 Attention Android users. How many times have you experienced battery depletion without any noticeable cause? This fault is not with the smartphone or the battery, but with the background applications.

Android users will be shocked with the number of apps that get activated at start-up. These apps run quietly in the background and suck the juice out of the battery. The perfect solution to the elimination of the problem is Advanced Task Killer for Android.

Android Task Killer is like the Task Manager (Windows) of Android. This app is highly accurate and immediately throws up a list of apps running in the background unnecessarily. The app features a tool-kit with options ranging from Ignore List, One Tap Widget, Auto Kill, customize item height and many more.

Another contributor to the whole background app fiasco is the absence of a close button for apps. So when the Android back button is pressed, the apps sometimes fail to terminate and keep running in the background, leading to extra battery usage. Native apps such as Calendar, Notes, Apps which have Event Notification features turned on are the biggest culprits for the fault.

The UI is simple just as the usability. Once the Advanced Task Killer is activated, a user just needs to check the apps he/she wants to kill and Voila! Its done.

However, there are some drawbacks with this app. If a person using the Galaxy S II forgets to ignore or uncheck Samsung TouchWiz, then the home screen reloads again due to Advanced Task Killer eliminating the TouchWiz UI. A very slick feature within the app itself is the Auto-Kill functionality. The Auto-Kill option has three levels Safe, Aggressive, and Crazy. All three modes have their own approach in treating background apps, running apps, and memory consuming apps.

So, Android users with mammoth screens and heavy processors should download this app and increase their battery life without losing out on anything. There is a PRO version also up in the Android market, but it just eliminates the ads and there is no added functionality to its name.