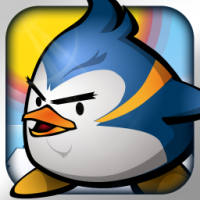 This is one game where instead of the birds, penguins get their share of the spotlight. Developed by GameEvil, who is no newbie on the block and has already released various titles on nearly all of the mobile platforms, Air Penguin is one of those sweet games meant for all ages and mind you, it is highly addictive.

Air Penguin is set in Antarctica and the protagonist is a cute, fat, little blue penguin with a grumpy face. His objective is to journey through the icy South Pole to help save his family from the melting ice-caps. Players need to make the penguin jump from one circular ice blobs, to another. Not very complicated, but not a walk-in-the-park either.

The gameplay is simple and very intuitive. Players need to tilt their device in the desired direction they want the penguin to land in. As the levels go by, the landing zone also start getting weird placements, sometimes placed 45 degree alternatively. Graphics are not the strongest point of Air Penguin, but the endless fun the game packs-in is.

Complications and obstacles do not only come in the form of landing zones, they also come in form of sharks, thin ice, and sometimes, even turtles. Players who just wish games offered second-chances will be thrilled. The game allows users to buy second chances and special abilities, in exchange for fish coins collected during the game. Players can also buy additional fish coins via in-app purchases.

Air Penguin boasts of over 125 levels in Story Mode; there is also a Survival mode with various obstacles and a more complex gameplay. Overall, the game is very playable, and its more than just casual fun. Android users are in luck, as the game is up for free. Air Penguin is also available on the iPhone at at $0.99, with Game Center integration.