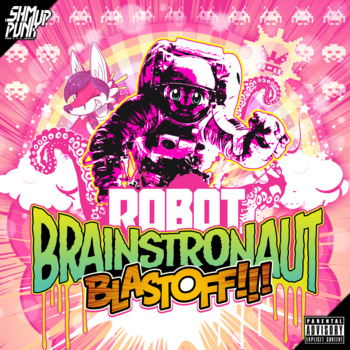 If you like techno, video game references, and ridiculously vibrant art covers, Robot Brainstronaut Blastoff is the prescription music you need to take. Produced and made exclusively by Renard (just one of his few aliases) through his personal, independent record label LapFox Trax, this Canadian electronic music extraordinaire sequences and mixes his tracks using state-of-the-art programs and equipment.

The album starts off with Make Believe, looping tunes that are quite familiar to cartoon shows and fantasy themed videos giving it a very childish and whimsical impression. It is then followed by Blast Off which is video game music in its purest form. It has a strong indication of retro 8-bit awesomeness.

The album ends with a three minute bonus track entitled Paradise Mirage that will transport you to a new world of computer generated tunes and melodies.

Robot Brainstronaut Blastoff gives you seventeen futuristic tracks that will tickle not only your auditory senses but also your playful imagination. A must listen to unleash the creativity inside you.