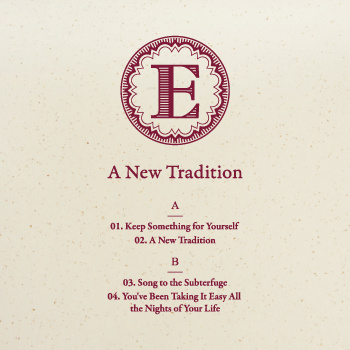 Hailing from Brisbane, Australia, the Epithets are Nick, Lisy, Simon, Dwayne and Alison. The five piece post-punk band plays a wide variety of instruments ranging from an electronic violin to the glockenspiel and melodica meaning you can expect a somewhat minimalistic and classy touch to the traditional indie punk genre.

A New Tradition is their latest EP continuing their prolific nature from their much lauded debut LP “Year of Glad” released on the previous year. Having the chance to record and their tracks remastered by known musical engineers, the songs herein show a marked growth in the band’s confidence.

Kicking off at track number one is Keep Something For Yourself, setting up the mood with constant deep drum beats and Nick’s bellowing voice, it fits in with the song’s thoughtful message of not asking the question “Why?”.

A New Tradition foreshadows the Australian underground scene while adding the light-sounded glockenspiel and melodica to the mix. Song to the Subterfuge reflects the band’s extensive time and consideration given in devoting to their craft while You’ve Been Taking It Easy All The Nights Of Your Life is a seven minute track wrapping up the EP crediting the band’s diverse influences and fixations.

Ever-prolific, and in spite of members now residing in different states, the band will be recording a new full-length LP in 2013 for release that same year.