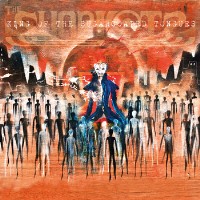 The Sunpilots: King of the Sugarcoated Tongues

The Sunpilots music echo a bunch of genres at the same time. From Dream Theater-like epic sweeps, to Jars of Clay pop rock sound and even a hint of 90s alternative rock; the band attempts to paint quite a big wall of sound.

Hailing from Australia but currently based in Berlin, the group is a progressive quartet made up of Raj Siva-Rajah (vocals), Bob Spencer (guitar), Andy Nielsen (Drums), and Justin Kool (bass).

King of the Sugarcoated Tongues is a concept album that marks the band’s full immersion into the progressive world.

This is the second album for the group and it’s proving to be an immense undertaking. King of Sugarcoated Tongues is filled with sweeping guitars, epic storylines and tracks that run between 4-8 minutes at a time.

Resounding in a cascade of intricate guitar solos, crescendos and wailing vocals; much of the music is meant to be played and enjoyed live. There are a couple of tracks worth picking out if you want to get a feel for the album yet hesitant at fully immersing yourself.

Chapter II: Captain Man is the longest single on the record, at almost 9 minutes running time but it’s also one of the most concise and catchy. Even though there’s a lot of Led Zeppelin-like tracks on here, this one reminds me more of 90s music. Think Ed Kowalczyk and the rest of Live and you’ll see how this fits into the era.

Title track, Chapter I: King of the Sugarcoated Tongues is another single you can make a beeline for. It’s one of those cuts where the band definitely nails the rock opera touch. The progressions are fluid and easily likable.

Although it takes a very distinct audience to appreciate the album, there’s no doubt the guys have something to show for. Personally, the songs take time to sink in but after awhile, you’ll find yourself appreciating the variations embedded in the tracks. It also helps that the vocals and instrument work is pretty good. Check it out. It might just become your new favorite record.