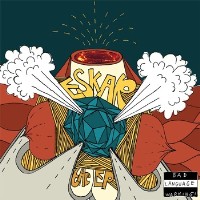 The aptly titled “The E.P.” is a 10-track compilation recorded back in 2011. Although it was meant to be released soon after; time, school, money and other events hindered the artist from doing so.

Luckily, he’s managed to still move forward with the debut and eventually offer this cool compilation for free download. Filled with samples, catchy and sometimes jazzy beats as well as some solid skills on the mic, Eskar is certainly an artist to check out.

The record brings in a lot of traditional style rap beats, coupled with a UK accent on the mic. This adds a nice little touch to the easy-listening tempos and mood found in most of the cuts.

A few tracks that pop out from the compilation include second cut, Music, which narrates the rapper’s struggles and gripes about music. Discourse, is another strong cut with a moody vibe while Abyss, is a more reflective song with a nice, slightly upbeat me background cut.

Although the album is far from perfect, it does have a certain charm that’s fun to listen to. This is the first record for the young rapper and it’s interesting to see where he’ll take his talent. For the meantime, check out the album and see if you dig it.