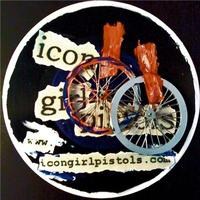 Icon Girl Pistols is actually a four piece band based in Japan. They sing rock, indie and alternative songs and release about one track per month for free download.

If you are not a fan of Japanese rock bands or simply can’t appreciate it, then you best stay away and check the other posts. However, if like me, you’ve grown up fascinated with almost anything Japanese, including Dragonball and Pokémon, then this record is quite a treat.

Each track  is fun to listen to and definitely worth checking out and downloading. All of their records so far, including this one, Crushed Beneath the Wheels, are available for free download on their website or Jamendo.

The band is made up of founders Shinnosuke Shirakura and Ken Fukuda. Theyare joined by Christopher O’Reilly, and Michael Jackson impersonator, Takashi Hasegawa. The group has been around since 2008 performing their brand of Japanese alternative pop rock. They continue to release one free single every month on their site. Their previous records include the four track compilation, Lettuce Colored Umbrella, and the Christmas album, My Bloody Christmas. The records were released in October and December of last year, respectively.

Some of the must listen cuts in my opinion include the opener, Crushed Beneath the Wheels. Even though it might sound like a typical Japanese pop rock cut, that’s actually part of its appeal. The track has a nice bass rhythm and the melody is quite fun. Another track worth checking out is the very 90s sounding cut, Family of Parrots. This features pop singer, Hana Sekitori.

Icon Girl Pistols is definitely a cool band that you can add to your favorite Japanese band list. Give their album a download right now.