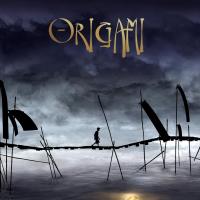 Spanning over eight minutes, the film tells the journey of a simple Japanese boy who will learn to appreciate tradition, such as origami making, through a single, overpowering experience.

Holding a simple yet solid story, the film manages to visually dazzle the audience while maintaining a fluid plot. One thing that makes this short different is its light and calming pace—it executed actions without clouding your mind.

The creators did not stir away from the film’s theme as they incorporated bits and pieces of Japanese culture throughout. I love how the characters’ appearance were inspired by the Noh mask while the dream/action sequence incorporated basic elements of Japanese art.

Scene after scene, Origami unleashes stunning images in a clean and mysterious manner. Its thematic and visual style will surely leave the audience in awestruck bliss.