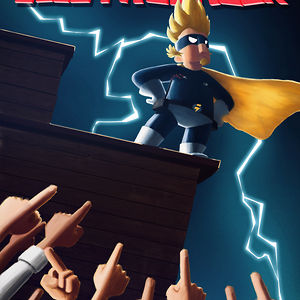 The story revolves around Buck, a lovable loser who after an electrical shock discovers the ability to ‘slow-down’ the time. With his newly found power, he poses as a superhero trying to impress the girl of his dreams.

The story will certainly appeal to kids and adults; reminding all of us that bravery is the best power of all and that hidden in all of us is a superhero waiting to be awakened. The addition of action-packed scenes and witty humor maintains the audience entertained throughout.

Technically, the short film is a visual gem. You can clearly see that it’s assembled with an intense amount of dedication and love so that every scene, every sound and every moment builds to an amazing masterpiece. I personally liked the comic book scene where the hero’s adventure is showcased by doodled cartoons.

Once again, creators of ESMA have proved themselves by surpassing its own standards of quality and humor. Electroshock is a brilliant action-comedy perfect for superb family entertaining.