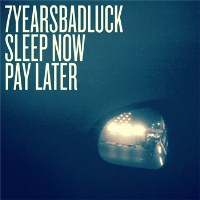 If you’re in the mood for some pop punk to perk up your day, 7 Years Bad Luck would make great company. This is the latest release from these Austrian rockers and it’s proving to be something that’s worth snatching.

Luckily, the boys are offering it for a free download over at their BandCamp. Of course, you can also show your support for the band by grabbing the vinyl version.

Mixing catchy hooks, some raw energy and an overall happy vibe, Sleep Now, Pay Later is one album that listeners shouldn’t miss out on.

Driven by “energy, short nights, and a certain kind of world weariness & heartbreak” 7YearsBadLuck might seem like another typical pop punk band but there’s actually something that’s endearing about their sound. Influenced by artists like Alkaline Trio and Jawbreaker, the group has been rocking out in various stages and even basements since 2001.

Like a host of punk rock tracks, most of the songs run between 1- 3 minutes. Starting with No More Drinking, the one-minute four second cut is a lot like rolling out of the car at top speed and hitting the ground running. It comes with fast guitars, rolling drums and hazy screaming vocals then before you know it, the song’s over. Most if not all, of the other tracks exude with this same upbeat, punk pop rock vibe that’ll definitely give you a jolt when you listen.

You can grab the download over at BandCamp. The album is available absolutely free.