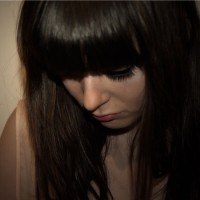 Grenadine is the solo project of French musician, Julie Branet. Initially trained as a violist, she started writing songs and became active with her music career in 2008. This self-titled debut carries four of her lovely tracks.

She’s also been touring to promote her sound. According to her bio, she’s shared the stage with artists like Heart and The Pirate Husky.

As you can see, the entire EP comes in French. Even if you don’t understand the language, the tracks are easy to like thanks to the French  language’s charm.

This self-titled debut comes with only 4-tracks but each piece is catchy and very easy to enjoy. Opening for the short EP is Sainte-Flavie. It’s a poppy track equipped with a lovely beat, making it a such a sweet cut you can’t help but head bob and toe tap with. It’s followed by Pleurer sur ton bras (or according to Google, “Cry On Your Arm,” not sure if that’s accurate). The song has a nice rhythm to play when you’re relaxing on your day off.

The other two tracks are L’amant lamentable and Papier carbone, which both echo typical French pop cuts. As mentioned, if you’re a fan of Feist, you’ll appreciate Grenadine’s sound.

Overall, the EP is a great find. Personally, I have no clue what she’s singing about but it doesn’t stop me from actually liking the songs. Vocal work, the instruments and the general composition are pretty good. Definitely recommend this one especially if you like foreign pop tracks. This is available as a free download.