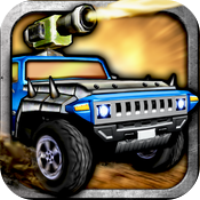 The Last Driver is all about driving in a muscle car in an apocalyptic landscape, trying to rend off zombies, dinosaurs and a host of other terrors that has come up from the world. Created by Chillingo Ltd, you have no goal other than to survive. If you’re looking for a fun game that has plenty of action and speed, this is it.

As you drive through the landscape battling zombies, aliens and other creatures, you’ll have to accomplish other side missions along the way which increase in difficulty. Some of the most challenging ones will have you driving with a timer while trying to gather a specific amount of coins. While they don’t advance the storyline in Last Driver, the missions are a lot of fun and add another dimension to the game.

Apart from the gorgeous graphics all the levels are randomly generated and they dynamically change. As you drive you’ll see UFOs and dinosaurs smashing buildings and so on. As you see the buildings collapse, you can use them as ramps for you to cross, but you also need to avoid obstacles as you drive along.

The game isn’t complicated and that’s just right. Rather than figure out some difficult strategy, you just need to run over those zombies and make sure the T Rex doesn’t catch up to you.

Last Driver has been called a driving game, but that’s not entirely accurate as you can’t move away from the path, so it’s more like an endless runner. Call it what you will, it’s really a lot of fun and exhilarating, and it’s free too.