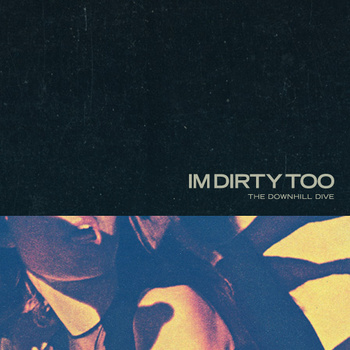 I’m Dirty Too: The Downhill Dive

When you put on I’m Dirty Too, you wouldn’t think there’s only two people behind the music. Duo Zac Brown and drummer Jess Gowrie make up the whole band.

Hailing from Sacramento, California; the pair first met in 2002 but it wasn’t until 2009 when they got together to start playing music. After unsuccessfully looking for possible bassists and vocalists, they’ve decided to retain their status as a duo.

That decision might be the best thing they’ve made music-wise, The Downhill Dive contains solid rock tracks that will make The White Stripes step up the game a bit.

Sharing vocal duties, the duo beautifully harmonizes and blends with their instruments. Their sound can be generalized as “rock” but there are layers of other genres that crop up in their music.

Portions of trip hop, alternative pop and indie rock make up parts of compilation. Without You, I’m Useless, presents the duo’s indie rock side with Jess dominantly and confidently singing for much of the track. In parts, this brings in memories of Karen O but with more mystery and confidence.

I Will is louder, grittier and overall a great noise fest that should be cranked up when played. It’s a short 2 minute interlude featuring shouty vocals, epic dirty guitars and just tons of energy. Punky Bruiser, treads on the group’s punk/alternative side while Can’t Get It, explores their Radiohead influence. Zac offers up great vocals on this track too, something that shouldn’t be missed.

Closing single, Spit, starts off quiet, slow and dark before bursting out as an epic prog-rock affair filled with massive drums, sweeping guitars and awesome energy.

The Downhill Dive is a highly recommended record. Personally, it’s one of my favorites for the year. They were right in continuing as a duo because from the sound of things, they already have everything they need. It’ll be exciting to see their future projects though.