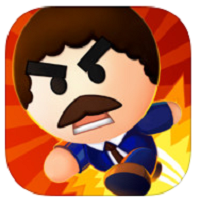 Battle Run S2 is a multiplayer running game from Game Hive Corp, and this sidescroller has pulled out all the stops and shows you just how fun a running game can be. After choosing your character you’ll get to race against three other characters to the finish. However, this isn’t just another runner though, as there are plenty of other things going on in the game.

Not only are you running against the competition but you also have to deal with plenty of obstacles and hurdles along the track. Aside from the obstacles and the other racers there’s also the small fact that everyone, including you of course, has access to weapons that you can use against each other to gain advantage. You can also set up traps to slow down your opponent, and they can do the same thing to you, increasing the fun factor.

Every racer also comes with their own boosters and weapons to use against the other racers, plus you can pick up chainsaws, axes and use land mines to slow your opponents; there is also an assortment of power boosters available scattered throughout the game. If that’s not enough there are also vehicles you can ride for short periods to help you win the race.

Overall Battle Run S2 is an excellent running game with plenty of twists and features to keep you hooked. The characters in the game are customizable and the multiplayer feature is spot on. This is an action packed game with lots of humor thrown in, and it’s a lot of fun.