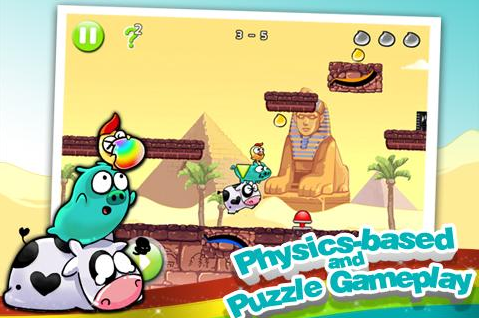 So here we are again with what seems like another “Angry Birds” ripoff. This time around the tables have turned a bit and we are offered Angry Piggy (Adventure). As the name says it all, in the game it is the pig who is angry, but very surprisingly not with the birds.

Developed by MPC Games, these developers have quite a few cute games under-their-belt, but it is the Angry Piggy that got them the impressive number of downloads within only a few days of its launch on the Android Market.

In the game, players are assigned with an elite team consisting of an ‘Angry’ Pig – Steezy, a Bird – Haden and a powerful Cow – Moochew. Players need to take revenge on a monster who has stirred up the most ghastly wind ever and robbed the colors of the once very colorful Utopia. So now the Pig, Bird and Cow are very angry and it is payback time for the Evil Monster.

The game will highly appeal to the puzzle fans and being a physics integrated game play, players are in for a delightful treat. Throughout the game, you will need to collect colors to restore the liveliness back to Avelon. Like every other game, even in Angry Piggy the difficulty while puzzle solving increases as the levels go by.

There are obstacles in the way that can be overcome by activating a lever, or moving a block or jumping on a button. Some advance levels will put players in a fix by placing two characters from the game. Now, while one can be controlled the other needs to be pushed or dragged for completion. The challenges are huge and this keeps the game going and keeps monotony out of the way.

The game features over 40 challenging levels with over 40 achievements. Players also get full-freedom to to switch between the three in-game characters for the best teamwork and game completion. If these options are not enough, the game also can be played via the Gravity Sensor using the device Gyroscope or the good-old virtual keypad. So a plethora of options are thrown in for the best game-play.

Overall, a great game providing a high level of fun with detailed graphics, cute characters, sweet music, easy controls and some brain tingling puzzles. A must have and a must try on all Android devices. At the end of the day it is nothing close to an Angry Bird rip-off because it brings a something of its own to us. Our rating 4 out of 5.