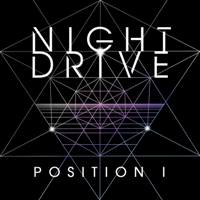 Fasten your seat belts and engage in psychedelic madness with Night Drive‘s latest musical offering, Position I. The Texas-based duo of Rodney Connell and Brandon Duhon paints a new face on the electro pop hemisphere with five tracks that pays homage to ’80s synth pop while at the same time pushing the boundaries of its genre to a more futuristic vibe.

The euphoria sets in with Drones, a simple yet well-thought record that showcases a palpable chemistry between funky punch of electro and layered vocal delivery. It’s that kind of song where you can just hang in your car with friends, eat some good burgers, and jam with this laid-back electro track.

Second stop is one of my personal favorites, No Plans. Seconds within the song and you’ll easily get hook with the animated electro tunes that dances seamlessly in between the sharp yet solid vocals. What makes this track stand out is its timelessness, you can put it on loop while you’re doing something and it will just keep you pumped up without getting stale in your ears.

After Dark fires and burns in a glamorous flair with bursts of lo-fi synths dispersed perfectly in tinges of high electro notes, adding depth and dimension to the piece.

Night Drive has established their mission to re-calibrate the future of electro pop, and Position I seems to be a very good start.