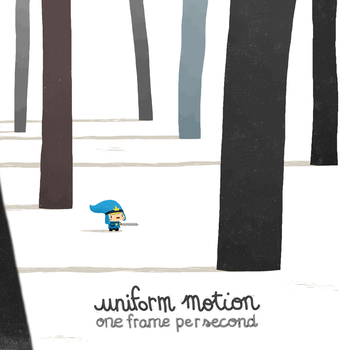 A three man group comprising Andy Richards, Renaud Foresti, Olivier Piotte, Uniform Motion originally started by publishing a series of episodes, with each including a song, video and an interactive comic strip illustrating the new creation.

After some time, however, the project had to adapt to the needs of their followers thus the French trio decided to release a compilation of their work. Little did they know that this was the start of a successful career in the music industry.

OFPS or One Frame Per Second is the band’s third studio album. Speaking in literary form, it is about the story of a knight starting off in life with the kind perils one would expect, such as getting attacked by giants, childhood sweetheart getting kidnapped, and his duty to find and rescue her.

Victory at track number one instills nostalgia, encouraging him to go back to his roots as he reminisces about the innocence of childhood. The song’s slow start which eventually builds up beat and rhythm perfectly fits in the mood.

Hearts continue the melancholic disposition, still heavy on acoustic guitar and lingering slushy vocals contribute to the lost childhood sweetheart dilemma encountered by our hero. Tape and Island did a very good job in summing up the mishaps and victories of our little knight.

Uniform Motion’s OFPS is a feel good indie-folk music that makes you light hearted as well as tickles your inner knight in a shining armor. A must listen to those who love to have little adventures of their own.