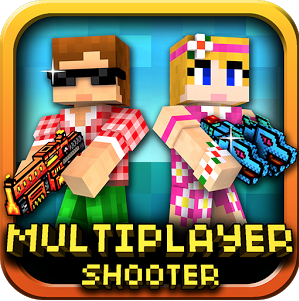 Pixel Gun 3D from Alex Krasnov is one of the many indie games that drew inspiration from Minecraft, and this is evident from the blocky and pixelated graphical style. But that’s what the resemblance ends because in this multiplayer shooter / survival game for the iOS, Android and Windows things run a bit differently.

As a shooter, this game is one of the most immersive on mobile, and it comes with two modes: single player survival and the multiplayer mode. Both modes have the same features that any gamer familiar with first person shooters will know. These include jump, reload, evade and shoot.

The single player survival campaign is pretty good, but it’s really the multiplayer mode where Pixel Gun 3D shines. As you might expect, multiplayer mode consists of a large map where players move and run around shooting each other, the objective being to reach a particular number of kills.

The multiplayer mode can be set globally or locally using an Internet connection and the best part is you can choose from a wide array of weapons. Apart from the weapons, you will also see a lot of maps, sprites and other objects that users have created.

In single player survival mode you will be facing a horde of spiders, zombies, ghouls and other monsters. This is a lot of fun, but you need to be creative and use some strategy since the enemy AI is pretty good and they move well. Though most players will probably opt for multiplayer mode, the single player experience is also good.