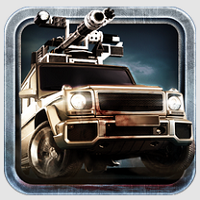 Zombie Roadkill 3D from Italy Games takes you into a harrowing, apocalyptic world that’s been overrun by zombies. In Zombie Roadkill 3D, you play a survivor who must do everything he can to battle the walking dead, but you’ve got plenty of weapons at your disposal to help.

To kill the zombies you go around in a vehicle that’s equipped with a machine gun and other heavy guns, and basically what you do is shoot all the zombies you can find or run them over. There’s no complicated storyline here, as it is all about killing as many zombies as possible.

The first level starts in your hometown where you’re immediately attacked by zombies and once you get passed them it’s on to the next mission. Aside from taking down all the zombies, you also have to be good at navigating as there are a lot of obstacles along the way. Fortunately you have five vehicles available and 10 weapons.

You can play Zombie Roadkill in either story mode or endless mode. Story mode has a simple story that progresses with each level, while endless mode is similar to most endless runners in you just keep playing to get the highest score possible. You get to kill the zombies with not just guns but also with some grenades and other goodies.

Overall, Zombie Roadkill is an enjoyable game, and it’s something that fans of the survival horror genre will definitely appreciate. If you’re looking to add another zombie shooter in your collection, Zombie Roadkill will be a good choice.