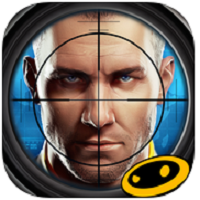 Contract Killer: Sniper is the latest installment in the Contract Killer series, and publisher Glu Games has made several improvements over the previous version. The graphics are better and the gameplay is just as immersive, and now you are a soldier who’s joined up with a group that takes out criminals, and it’s a lot of fun.

Basically the game is all about killing the criminals as directed by the organization. To complete these missions you’ll need an assortment of weapons, but that won’t be a problem because there are snipers, bombs, assault rifles, knives and other weapons that you can use.

But this isn’t just another sniper game as Glu Games has thrown a few twists here and there. Each mission starts with you having a primary weapon which dictates how the mission will go. Though there are many sniper missions here, some involve assaults which necessitate the use of different strategies.

One of the nice things about Contract Killer: Sniper is you can take advantage of different cover points and find the ideal angle to take out the target. During the assault missions however, it’s more in-close fighting, while the sniper missions will have you hunting for a target first.

Because of this setup, Contract Killer: Sniper differs from other shooters as you can’t just go around randomly shooting people. If you like shooters and sniper games but getting tired of the usual formula, then you should give this title a try, as it offers something different yet also familiar.