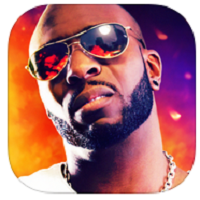 All Guns Blazing from Eight Pixels Square is an action packed game that takes you deep inside the world of crime. Your goal is to rise to the highest level in the criminal cartel, all the while taking down rival bosses, robbing banks, killing the mob and eliminating whoever gets in your way.

All Guns Blazing isn’t just about shooting everyone on sight though, as you’ll also need to do some management as well. You start the game from the bottom and from there you either join an existing cartel or make a new one. Once you’ve made your choice it’s time to go after the big mob bosses or other players via PvP.

Your missions range from stealing armored cars to banks and anything else of value in order to build up your empire. You’ll start small, but if you keep playing the game you’ll eventually gain ground and if you take over the cartel in the US you can move on to Mexico. Of course you don’t need to do this alone as you can team up with other players and destroy the rest.

At the heart of All Guns Blazing is definitely the action, and you’ll be spending most of your time shooting in a lush 3D environment, one of the most visually stunning on mobile yet. There’s also a fully interactive 3D map that will come in handy as your cartel grows. In addition, All Guns Blazing has dozens of weapons, boosters, power ups, valuables, and just as many missions to choose from.