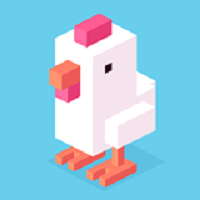 Crossy Road is best described as an endless hopper game, and yes, it’s all about why the chicken crossed the road. The game, developed by Hipster Whale, isn’t just another endless runner wannabe though, as it’s got a lot of striking visuals and a surprisingly addictive gameplay.

Crossy Road’s retro style graphics are a lot of fun, and the randomly generated terrain means your chicken doesn’t have to cross the same old road. Also, you can unlock a lot more characters as you play the game.

The controls are also easy to learn, as you just tap to hop forward and swipe to move down, right or left. Even if you have never played a game like this before it won’t take long before you figure out how the game controls work. The challenge comes from trying to avoid the obstacles that are randomly produced on the terrain, plus you also need to beat the scores that other players have reached.

Crossy Road is tough, and it’s easy to get flattened or taken up by an eagle if you end up near the bottom of your device’s screen. But it’s just as easy to get back in the game and give it another shot, and you will want to keep coming back because Crossy Road is addictive.

The presentation is also a lot of fun, and the blocky, stylized cartoony look fits in well with the team. Another incentive to play the game is you can unlock other characters from other titles as well as zombies, movie monsters and other creatures.