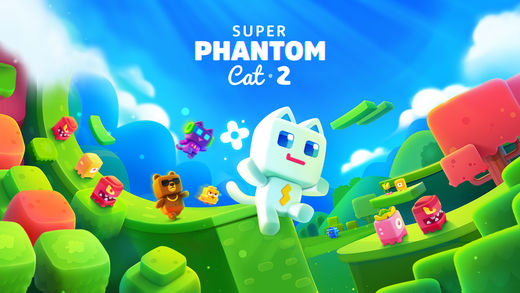 Super Phantom Cat 2 is the followup to the popular Super Phantom Cat. And like any good sequel, veewo Games brought back all the stuff that was good in the original and adds to them. Some resource management has been added, and you’ll be able to unlock a bunch of other characters as well.

This platformer starts with Ari the cat on his quest to rescue Ina, his sister. This means leaving Mystic Forest and leaping over obstacles and enemies in various levels. You also have to gather coins and look for treasure chests and get the bonuses there.

The treasure chests also comes with additional lives as well as the ability to acquire new skills. There are several environments that you’ll be able to explore, and it is this varied approach that will make you want to play it again and again.

Controls are also simple, with three buttons for jumping and moving left and right so you get the hang of it quickly. Super Phantom Cat 2 has lots of layers that set it apart from the regular sidescroller and platformer. As you advance you’ll be able to unlock more characters along with extra quests. The game also allows you to use diamonds and coins in buildings. These structures provide elixirs and other items that will help you later on.

The better you’re able to manage those resources, the more these buildings will be able to help you advance in the game. This again shows how deep the game is and why you’ll be playing this for a while.