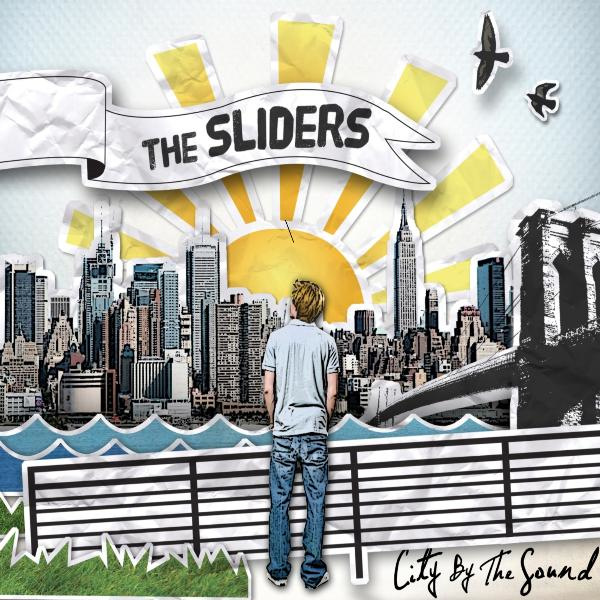 The Sliders: City by the Sound

Eric (vocals/piano/guitar), Bryan (guitar/vocals), Mike (bass), and JD (drums) – The Sliders – have been playing together until their voices were sore and fingers blistered in the basements and garages of Long Island for years now.

They have been stirring up their hometown crowds while performing at many of the local venues until finally, with their first EP Eric & The Sliders released in 2007, they got their first big break onto the rock scene of NYC.

Now with the official release of their first full length album City by the Sound, filled with wonderful blues-inspired pop rock sounds, the band did it again. So be sure to download the five amazing songs from the album, handpicked (by The Sliders) specially for our readers.

Ever since their first EP, the band spent countless hours writing, practicing, and recording their new material, all while adding even more amazing live shows to their already hectic schedules. They have performed at the Bamboozle Festival in 2010, numerous venues in NYC, Long Island, and many of the cities in Northeast including Philadelphia, Washington D.C., New Haven, and Ithaca.

In the end, however, keeping more than just busy paid off with the release of their first full length album City by the Sound in April of 2011. Produced by Jim Wirt (Incubus, Hoobastank, Jack’s Mannequin, The Rocket Summer) the album came with a number of great reviews and eleven great pop-rock treats ready to melt your heart.

Our special release of five handpicked songs from the album begins with City by the Sound, probably one of the most upbeat tracks, equipped with an amazing guitar solo ready to get you up on your feet and lyrics that will certainly remind you of all the adventures growing up in suburb of a big city.

But don’t worry, if you didn’t grow up i the ‘suburb of a big apple’ there is still plenty of songs just for you. There is Chasing After You with its catchy melody and flawless drums, and Underground, filled with great sounding vocals all wrapped in the unique blend of rock and blues influences. And if you are ready for something just a bit more softer be sure to check out one of my very favorite songs from the release,The Dreamer, which comes with some of the most powerful vocals you will hear in any of the tracks.

All in all, The Sliders have definitely grew since their very first days playing in the basements and garages of Long Island, and their music have quickly evolved into a blues-inspired pop rock sound that now sets them apart from the masses of power chord bands.

“The Sliders are hungry for the masses” so be sure to let them inside of your sacred iTunes libraries, turn up your speakers, and share the love.

(If you like what you hear be sure to visit iTunes to get the copy of the full album and Like Them on their Facebook page!)