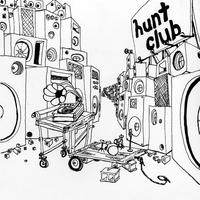 Hunt Club definitely knows how to put together an energy-filled rocking compilation. These boys have been around the block since 2005. So far they’ve released 5 compilations, each one bearing their resident indie post punk rock sound.

Even though it’s already 3 years old, this Hunt Club LP still sounds fresh and filled with a raw energy that echo right off the stereo as you play it.

It might seem weird to associate the band’s sound with  their self-written description, nevertheless, it does perfectly capture the band’s sound aesthetics. Their eclectic arrangements and weird vocal work in certain songs, keep listeners guessing what they’ll do next. Although I’m not fully sold out on the entire record, there are several tracks that are worth checking out.

Opening track, Knife Fight, is a mix of gypsy rock and roll that is catchy and loud. Meanwhile, Drowning Man, is a quieter cut with a rather darker mood. The latter also incorporates some weird vocal work; bordering on kitschy but it works great for the song nonetheless.

You can check out this record as well as the other albums that the guys have to offer right on Jamendo page. Their compilations are offered for free legal download under a creative commons license.