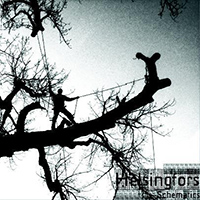 Helsingfors is a five-person instrumental post-rock/math rock band from London, England. The band, which includes all four members of the now-defunct instrumental band From the Sky, is composed of Daniel King, James Morris, Barry Rogers, Alan Ross, and John Spears. The band has released its debut EP entitled “Schematics,” which includes four all-new songs. “Schematics” was recorded primarily as a live band, and as such, the EP pulsates with all the energy a live show brings.

The album is available now as a free download from the netlabel Lost Children.

Math rock is described as a “rhythmically complex, guitar-based style of experimental rock music” (per Wikipedia), and the music on “Schematics” embodies that. All four songs on the EP are interesting, guitar-driven, and have great rhythms you can rock out to. While each song has a pretty good drum beat, it’s the guitars that are the stars of the EP. Every song has an excellent riff to it. The complexity of the work also shows; just when you think you know where a song is going, or how the beat is supposed to go, Helsingfors throws in a little syncopation to the mix.

The band takes the geekiness inherent in a style named “math rock” to heart, at least in their song titles, such as “Angle of Depression” and “The Panda Conundrum.” (The song titles also sound like titles of “The Big Bang Theory” episodes.) Don’t let that discourage you from giving this a listen, though. The music shows none of the awkwardness associated with geekiness. Each track is a confident and soaring song that you can definitely rock out to. The music doesn’t suffer from a lack of lyrics or vocals; in fact, it allows you to fully immerse yourself and enjoy the melodies and guitar-work that Helsingfors puts into their music. Plus, despite the fact that the tracks run a bit longer than usual (the longest track is seven minutes and thirty second long), none of the songs feel overlong. The band switches things up enough within the song to keep your interest.

Instrumental rock doesn’t typically get the publicity or renown as rock music with vocals, but you should definitely give Helsingfors a shot. If you enjoy well-crafted melodies and strong guitars, then “Schematics” is a must-download for you.