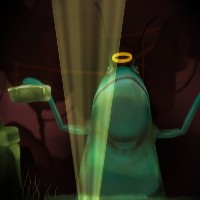 In the indie gaming world, it’s quite rare to find a commercial-level game being offered for free. Of Light & Shadow is one great example of this.

Created by a group of Austrian students, the gang proves time and again that sometimes all you need is creativity and dedication to create a game that’s on par with some of the more successful commercial releases out there.

This little 3D puzzle game involves two characters, Dr. Shadow and Mr. Light. As the name suggests, one can only move in light while the other in darkness.

Even though it’s a small game, it offers so much to its players. Showcasing beautiful and smooth graphics using the Unity 3D Engine, the design isn’t the only thing fans rave about. The actual gameplay and concept are brilliantly done as well.

The game introduces two main characters; one of which can only function through the lighted areas while the other one remains in the dark. Their opposite behaviors don’t stop there. They also feature very specific skills that becomes useful in certain phases of the game. The light-only character provides great jumping abilities among his strengths, while the opposite one highlights his capacity to scale walls or vertical surfaces.

During the first level, each character gets a proper introduction; giving players a chance to become acquainted with them and their abilities. Pretty soon, obstacles will be thrown along the way which forces gamers to switch between the two characters, exploiting their abilities. Exciting switches as well as challenging monsters stir things up. There’s also a nice puzzle element added to keep everything interesting. On the other hand, a nice checkpoint system is in place in case things don’t go according to plan.

Like most games, it’s not flawless. It has received a few complaints for its controls but this isn’t really reason enough to pass it off. For a free game, players definitely get more than they could hope for.

Of Light & Shadow creates an alluring world that artists and gamers will appreciate. There’s enough interesting gameplay as well to keep them distracted for a little while. Check out the trailer below and give the game a try.