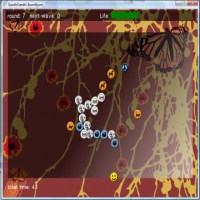 Gandhi Gandhi Boom Boom is a bit unusual in that it forces you to merge the opposites. In this game, you have to work hard to make sure that Gandhi and hamburgers do not connect as much as possible.

The interesting gameplay and the non-linear game concept is what’s held as a standout for this game. It won praises at the 2009 Global Game Jam and was developed by Clement Linel, Eric Scott, Rosanna Lopez, and Traci Lawson.

Starting off with a single Gandhi head that you can place anywhere, you have to pair similar icons (Gandhi with Gandhi; hamburgers with hamburgers) with each other. These other balls drift towards the solitary Gandhi head at the center of the screen. A green bar at the top indicates the amount of time you have left and for every successful connection you make, you earn 2 seconds in your time clock.

If in case you attach a hamburger to Gandhi, 10 seconds worth of time is cut from your green bar. Of course, this also means that you can hook a hamburger easily to other hamburgers. However, as mentioned, in this game, opposites attract so Gandhi will naturally be drifting towards burgers and vice versa. This the tricky part for you. Other icons begin to appear to make life tougher for you. Again the same concept applies to these.

It can get pretty messy quite quickly so you have to be on your toes as you play the game. The cute and innovative gameplay makes it fun to play. Of course, there’s a learning curve buy you’ll definitely get better at it on no time.