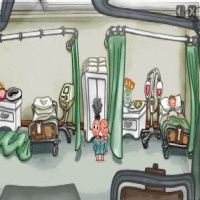 The Unicated is a short adventure game that served as an entry for the monthly AGS competition. The contest encouraged indie developers to create a game in less than a month following the rules set by the previous winner of the competition. For this season, the theme was “evil twin.”

Appropriately enough, The Unicated is about two conjoined twins struggling to prevent doctors from separating them. It’s main creators include Duzz (Wintermute Studios) with music from PlantMonster and TheShanx on background art. The game is simple but highly entertaining and the graphics are definitely something to check out.

In the game, you play Bo and Mal, conjoined twins that don’t want to be separated from each other. The only problem is that they’re stuck in the hospital with the doctors and nurses busy prepping for their surgery. They must find a way to get out before it’s too late.

Controls for the game are quite simple. You can use both the brothers for very specific functions. For instance, pressing the left mouse button allows Bo to inspect his surroundings while Mal can grab something if you press the right button. You just have to move the cursor to the object you want to pick up or look at.

The game is a bit short, with only three rooms available. However, it does pack enough puzzles for you to have an entertaining run. Graphics for the game are in 2D and quite cute. It would be nice to see this game expanded a bit more since the characters are very lovable. Overall, it’s a nice little distraction that you shouldn’t miss out.