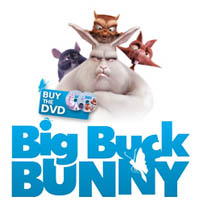 ‘Big Buck Bunny’ is a short 3D animation movie created by the Amsterdam based ‘Blender Institute’ and a small international team of creators. After a production period of over six months, this short film premiered in the hip new Amsterdam cinema ‘Studio K’ and is now available for everyone else to freely enjoy and share.

First Movie Ever Featured by FrostWire

Big Buck Bunny is the first Creative Commons film to ever be featured on the FrostWire welcome screen. It’s also the first download to be featured in 2009 to the p2p community.

From the Big Buck Bunny website:
As a follow-up to the successful project Orange’s “Elephant’s Dream”, the Blender Foundation initiated another open movie project. Again a small team (7) of the best 3D artists and developers in the Blender community have been invited to come together to work in Amsterdam from October 2007 until April 2008 on completing a short 3D animation movie. The team members got a great studio facility and housing in Amsterdam, all travel costs reimbursed, and a fee sufficient to cover all expenses during the period.

From the Joint press release of Blender Foundation
and Creative Commons Netherlands:
‘Big Buck Bunny’ is a comedy about a well-tempered rabbit “Big Buck”, who finds his day spoiled by the rude actions of the forest bullies, three rodents. In the typical 1950ies cartoon tradition Big Buck then prepares for the rodents a comical revenge.

“The primary intent of the movie was to stimulate the development of open source 3D software” said producer and Institute director Ton Roosendaal, “But the result equals on artistic level as well as on technical ingenuity the quality of what you would expect from large animation studios”.

Creative Commons & Open Content
The movie differentiates itself mostly by its totally open character. Not only open source tools such as the 3D suite ‘Blender’ were used to create the movie, but also the movie itself – including all materials as used in the animation studio – will be freely accessible for everybody to reuse, to learn from it or just to enjoy it.

The promotion of Open Content creation and distribution is one of the main goals of the Creative Commons, the organization that created the ‘Creative Commons’ licenses, which have been widely adopted by artists, musicians, and other creative individuals who wish to freely share their creative endeavors.

Blender Institute in Amsterdam is one of the first companies worldwide exploiting Open Content professionally and commercially. Currently 14 people are working full-time in the Institute, (…) working on an Open Game based on the characters from the movie.

Available Formats
‘Big Buck Bunny’ was released on 35mm film format, on DVD and Blu-ray for a small price and a free download in multiple formats. You can always download the movie harnessing the power of p2p by downloading a torrent file and saving the Institute some bandwidth.

Show your support
You can support The Blender Foundation and The Peach Project by purchasing the DVD or BlueRay discs.

On the Big Buck Bunny DVD (two disks) you will find:

We recommend a VLC player to open the ‘Big Buck Bunny’ animation. Because of its high quality and a compression type, some older video players might not be able to handle the file.