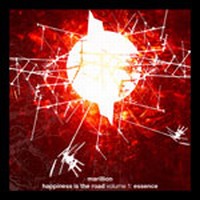 Marillion: Happiness is the Road

Happiness is the Road is Marillion’s 15th studio album, released as two separate album-length volumes respectively entitled Essence and The Hard Shoulder. The overall playing time is 110 minutes (116 including a (semi-)hidden track), taking it to double album length. According to the band, the album combines their signature rock sound with “elements of pop, dub and soul and draws influence from artists as diverse as The Beach Boys and Marvin Gaye to Interpol, The Doors, Traffic, Pink Floyd and David Bowie.

The album also sees Marillion experimenting with a host of new instruments including, Dulcimers, Glockenspiels a Harmonium, French Horns and even Sleigh bells a Harp and Zither.” The title track “Happiness is the Road” was inspired by Eckhart Tolle’s book The Power of Now. The album’s artwork was created by the Spanish artist Antonio Seijas in cooperation with Marillion’s long-time designer Carl Glover.