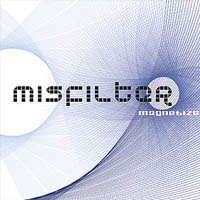 MAGNETIZE was the debut record of electronic music group Misfilter.

From Magnetize’s Jamendo Page:
What would become their trademark (weaving a musical tapestry of various electronic music genres) quickly comes evident as the trip-hop and dub influenced “Intro” leads into the frantic jungle rhythms of “Sunshine From The Rain”. Later on in the album the pace slows down with the digital pop-ballad “Lovely”.

To go on even more of a tangent “Like An Angel” exhibits guitar driven fem-rock. Drawing heavily from his roots as a drum and bass DJ, producer Jon “Chord” Gos crafts an expansive project that compliments both the lyrics of vocalist/songwriter Hadley Poole and the guitars of James Staubes. This is no more evident than at the album’s apex “This Is Love”, a high-energy PJ Harvey cover of epic proportions.

From Misfilter’s MySpace:
MISFILTER got it’s start in early 2002. Starting out as raw breaks and a couple simple beats, Misfilter grew to a live PA, adding a guitarist and keys to the mix. Based between Atlanta and New York, Misfilter released and licensed it’s first single, Want It All, with remixes from Sketch and Code, Influenza, and Barry Bond.

Right now both Jon and Hadley are currently working on solo projects…
This is only a partial copy of the album. To get the full thing, please visit iTunes here.