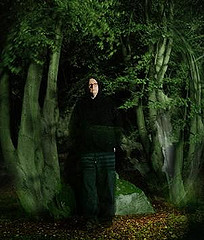 Anders Ilar is a Swedish electronic musician and producer. He started his relationship with music as a child, playing the piano at age six. He discovered electronic music as a teenager and spent countless hours playing with synthesizers, sequencers and drum machines. Since he was never 100% happy with his compositions he stopped recording in late 90s, but quickly returned after discovering computer software as a way of producing music. To date, he has released 5 albums and 13 EPs & 12”. “Twilight Rainfalls” is a free mp3 album Andres released as a gift to his fans and friends.

Released on 23rd of December 2008 to celebrate the new solar year. The 8 new tracks on Twilight Rainfalls are based upon a meditative piano session recorded on October 19th 2008 in Ludvika. The recordings was later cut into parts and used as source material for the tracks. The initial idea was to make a very quiet ambient album with only some 808 rhythms to compliment the piano, however after the first track was finished (in light we trust) I realized that this would not be the case. The rest of the tracks was put together in the following weeks. The 9th track (althea) was produced some years ago using the sound of the very same piano.

As times are becoming rougher for many labels and distroes, I realized it would be a long time waiting for a CD or vinyl deal for this material. And with things being as they are I believe the best way to spread these vibrations is in free digital format.
So realizing this work might disappoint a few of my listeners, at least now you know the story behind the music and its intention is simply to be what it is (music), while hopefully inspire the listener to raise the frequency of love on this planet.