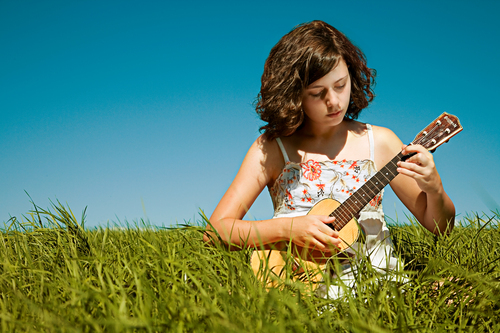 Entertainment For The Brain Dead “Seven (+1)” EP – a melodic treat

Entertainment For The Brain Dead is the one-woman band of Julia Kotowsky. Only 21, Julia is based in Cologne, Germany, recording her songs with a USB microphone connected to a PC. She writes, composes, and records her own music and even makes the album covers by hand (available only on demand). She has released three albums so far, the latest of which is “Seven (+1)”, a charming, whimsical acoustic album accentuated with ukulele strains, the sound of hollow paper bins, and even pepper mills.

“Seven (+1)” is quiet, with all songs sounding almost like lullabies. Julia’s voice is whispery and cool, reminiscent of Feist’s and Imogen Heap’s. My favorites are “Skin” and “Spiders”, two slow dreamy songs played with chimes and the ukulele. I like the homegrown, personal feel of Entertainment For The Brain Dead’s music. These are songs to listen if you’re into quiet, acoustic music and when you need to relax or to be lulled to sleep (take note, not a bad thing!).

There are only seven physical copies of “Seven (+1)” originally hand-made by Julia. It has seven tracks plus one live recording of a performance in Hanover, hence the title. The album was really meant to be a tour EP, where one CD for seven days was given away to one lucky member of the audience in a raffle. Julia eventually decided to share the album online, but you can order a physical copy and pay for how much you think it’s worth.

Entertainment For The Dead released “Seven (+1)” as well as her two other albums “Hydrophobia” and “Hypersomnia” to net labels Aaahh-records and Aerotone.