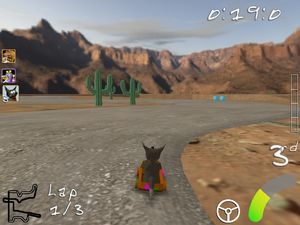 Don’t you just love that rush of adrenaline when you are driving or racing a car to beat somebody? You could get just that – plus more. How about the sight of cute characters rushing around in their little go-karts?
Whether you’re racing on the beach, or towards the lighthouse, SuperTuxKart will surely give you hours of fun. With dozens of characters and tracks to choose from, your every race is definitely different from the others.

SuperTuxKart is an open-source racing game which allows you to play with up to 4 friends on a single PC. And since the developers wanted to make it realistic as much as they want it to be fun for players, they made in 3D. Yes, you read that right: a free 3D, open-source, racing game which runs on Windows, Linux and Mac OSX.

SuperTuxKart has over 20 tracks and battle arenas where you can play with your other friends under its Multiplayer Support. A network multiplayer feature is under development, so we might want to check out soon for that.

Unlike other races where you just need to drive, turn and overtake other racers, SuperTuxKart makes it different. You have ‘powers’ to use against your enemies, and at the same time, they can also use them against you. So beware of those bowling balls or bubble gums hauled at you by your opponents just to hit you off. The game has 5 modes: Grand Prix, Single Race, Time Trial, Follow the Leader and 3-Strikes Battles so you can play however you want, and whichever character you want.

STK’s history comes from TuxKart. It was actually stucked for 2 years since 2004 without any improvements and development because of a disagreement. After which, it was then continued in 2006 by Joerg Henrichs, and released SuperTuxKart in September 2006.

SuperTuxKart gives you lots of game time and lots of fun, as well. With this game, you won’t have to buy 3D racing game for your computer in the near future.