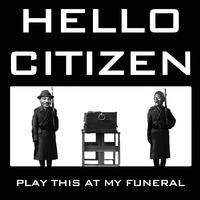 Ben Wolman has done it yet again! The one and only member of Hello Citizen produced another album that will push Rockers to their limit. “Play This At My Funeral” is Hello Citizen’s second amazing album, packed with jaw-dropping acoustic play and Indie Rock vocals that fits the mood of every listeners. It doesn’t matter if you are in your teens or in your mid-20’s and up, Hello Citizen knows how to mesmerize fans with his very awesome musical gift.

“Play This At My Funeral” has 12 songs. Basically, the album is more of an Acoustic Rock album. Yes, you read that one right. If his first album made your head bang as if you’re in an Oasis concert, this album will not disappoint you as well. Compared from the first album, however, Hello Citizen, also known as Ben Wolman, gave listeners more pieces of his talent in guitar playing. What is amazing about this album is that Ben recorded every track in just a single take and only with his faithful guitar and powerful vocals. He also gave the listeners a true feel of how he performs when he’s on stage.

Three out of 12 songs in this album appeared in Hello Citizen (his first album) already. “The Brave Worms of The Future,” “Straws,” and “Paint By Number” were remastered to fit the album’s theme. The 12 astonishing tracks of “Play This At My Funeral” are listed below:

Licensed under Creative Commons, this album will surely open your ears to new horizons of Acoutic Rock and really great talent. Downloading “Play This At My Funeral” is going to be like a ticket to hear Ben Wolman aka Hello Citizen play live! This album is undoubtedly worth listening to.