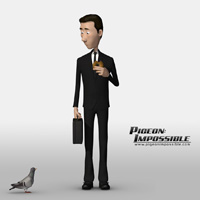 “Pigeon: Impossible” is the tale of Walter, a rookie secret agent faced with a problem seldom covered in basic training: what to do when a curious pigeon gets trapped inside your multi-million dollar, government-issued nuclear briefcase”.
This animated short movie is not only technically impressive, but also very well crafted in terms of the story line, keeping the viewer truly entertained for the entire 6 minutes.

“Pigeon: Impossible” is a tribute to what a small talented team of volunteers can produce with time & perseverance.

About the Production
Production on the film spanned for nearly 5 years and is the first attempt at animation by writer/director Lucas Martell: “When the project started, it was really just an excuse to learn 3D animation, but by the end of the project I had spent so much time reworking and polishing the story that I just wanted people to laugh.”
The end result is a hilarious 6-minute romp through the streets of Washington D.C. as our hero fights to save himself, and the world from the chaos reigned down by a hungry pigeon. Breathtaking visuals and a sweeping soundtrack showcase the work of nearly one-hundred talented artists and musicians, and the film stands as a testament to what can be accomplished by a team of dedicated volunteers working for the love of their craft.

Technical Achievements
Although the project started out as a simple test animation, it quickly ballooned into a no-holds-barred attempt at studio-level CGI filmmaking. The repeated emphasis on solid storytelling meant that technical considerations often came second to what the story required. This resulted in a level of technical hurdles far beyond what most independent shorts attempt, especially one that was made for less than $10,000 and created entirely in people’s spare time. Countless weeks were spent optimizing assets in order to render the expansive environment, a pass- based look was developed to allow for the use of more expensive ray-tracing techniques, and hundreds of custom tools were written to accommodate the massive amount of data that had to flow through the pipeline.

The Team
Lucas Martell (Writer/Director/Producer/Animator)
Lucas is a freelance animator and VFX artist. After graduating from Millikin University with a bachelor’s degree in Commercial Music, he moved to Austin, Texas and began production on “Pigeon: Impossible” in the summer of 2004. The film is his first animation, and took nearly 5 years to complete. Since then, he has also become widely known for his weekly podcast that chronicles the techniques and obstacles he’s faced throughout production of the film: www.pigeonimpossible.com/podcast

Austen Menges (Editor/Additional Story)
Austen began his editing career in 2003 with the short film “Toward the Near,” which screened at the Director’s Guild of America Theatre and the Houston Museum of Fine Arts. Most recently, Menges co-wrote and edited the short film/web series “Script Cops,” a film industry favorite about cops who arrest people for bad screenwriting.

Christopher Reyman (Composer)
Christopher is a Ph.D. candidate in music composition at the University of Illinois. In addition to performing regularly with various jazz and chamber orchestras, Chris has written over 200 pieces and spent nearly a year composing the score for “Pigeon: Impossible” which was performed by two orchestras and required 74 musicians.

If you love the project and you want to find out more about how it was created, make sure to subscribe to Lucas Martell’s Podcast!