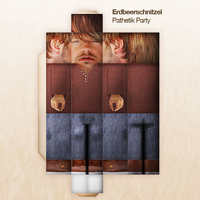 A lot has happened in recent years that is making me give electropop another chance.

You might think there’s only so much that can be done with dancey club-type music, but the advent of IDM as a distinct “listening” genre (i.e. stuff you might actually play at home) has really opened doors for musicians like Tim Keiling, also known as Erdbeerschnitzel, to spread their wings and explore a bit.

Pathetik Party is the result of one such exploratory journey. This album took me by surprise, that’s for sure. It’s one of the freshest things I heard in 2009, which makes me think that some of it may have taken Tim Keiling himself by surprise, as well. To quote Keiling’s mission statement:

This LP is my personal good-bye to genre-specific music and the imitation of existing patterns. I don’t want to fit any expectations but the ones I have in myself. It is not a reference to the recent state of electronic music, but one stage in my own musical development.

That’s an interestingly concise proclamation, considering how much musical area Pathetik Party covers. Traces of mid-’90s club music, dreamy dubstep beats and vocal samples, glitchy electronica, dark ambient… it’s all there, and somehow when an artist gives up and becomes this honest about just doing what he feels at this very moment, a set of songs this diverse hangs together remarkably well.
Pathetik Party by erdbeerschnitzel

Just because this music holds up from a listening perspective doesn’t mean that the dance aspect suffers, however. Quite the contrary – I often find myself involuntarily moving to tracks like “Walkampfchampagne” (featuring killer bass and horn lines) and “Distanztanz” (which is laced with hints of Burial’s sound). But there are other, more cerebral efforts on this LP, too. The title track, for example, takes you to that same neighbourhood in your musical history where Aphex Twin used to live. It moves, but as the first track on the album, it serves as more of a warning: fasten your seat belts, you’re in for a delightfully bumpy ride.