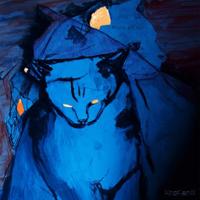 I was familiar with Krakenti’s work in the context of heavy industrial music – kind of like Trent Reznor in his angrier days.

While I do like industrial, I find that most independent industrial albums can get very same-y after a while. Thus, I was pleasantly surprised to see that Krakenti’s latest release on Bumpfoot, Mice Plan, was described as a mix of “various styles,” industrial blended with trip-hop and ambient. I wasn’t disappointed.

Krakenti is Nickolai Vrlamov, born in Latvia but now living in the UK. His first love is clearly industrial music, as you can detect an industrial influence in pretty much everything he does. In the past couple of years his album release schedule has accelerated, and in 2009 he put out no fewer than five releases, covering a range of styles and genres. Mice Plan is by far my favourite of the group, as it covers a lot of the ground I expect from a more mature industrial release. And yet, Vrlamov is only 21 years old.

There’s a very interesting sense of energy control in this set of songs, and I definitely got the impression that Vrlamov pays close attention to the order in which tracks appear on his releases, as it can have a profound effect on the impression the listener is left with. Both the first and last tracks are mellow and repetitive, giving the album a sense of having a frame or container that holds within it some more assertive and energetic offerings. “Story of One,” for example, shows Vrlamov’s mastery of using tempo control to manipulate the listener, and the energy in this track is off the scale, even without it ever blooming into a full industrial beat.

It’s the little details in Krakenti’s music that make me look forward to his album releases, and Mice Plan is a perfect example of how meticulous he can be when he wants his songs to convey a very specific mood or emotion. Combine this with his keen melodic skills and and excellent sound engineering ability, and Mice Plan fills me with anticipation for whatever Krakenti comes out with next.