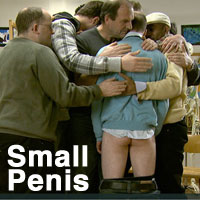 A graduation film by a group of students led by writer Stian Hafstad, ŌĆ£Small PenisŌĆØ briefly chronicles the story of Daniel who has huge insecurities about the size of his penis and joins a support group that’s a bit out of ordinary.

Produced with a budget of US$400-500 and filmed in only five days in Bergen, Norway, this amusing short film is very well written, shot and composed of surprisingly good, convincing actors. For a film title, ŌĆ£Small PenisŌĆØ gives a lot, despite its size. Different folks will have different reactions, naturally. Some will be quickly amused, others displeased, and others, stoked.

To elaborate, those who are quickly amused probably felt this film has a hilarious. They are right. Those who are displeased probably thought ŌĆ£Small PenisŌĆØ is just another meaningless film guised as art by those who had nothing better to do. They should watch this. Those who are stoked probably assumed this is a product of playful and creative minds who take their sense of humor seriously. They couldnŌĆÖt be more right on the money, at least when the first half of ŌĆ£Small PenisŌĆØ is concerned.

The characters belong to a support group that would remind you of the usual AA meeting scenes in the movies. While these menŌĆÖs feelings may be inconceivable for a woman like me, the amusing way in which the story is told did humor me every minute of it, until they started singing and dancing. The music is actually good and catchy (written by Erlend Myrstad), it is just the amount of time spent on singing and dancing that I have some issues with. It would have been better if the film further explored the thoughts and relationships of Daniel, instead of showing a song-and-dance and bloopers sequence. Bloopers are always welcome for me, but a short film has to be packed and every minute must be maximized. In the end, it seemed the creators just wanted to have fun and I see nothing really wrong with that.

The film was shot on Sony XDcam, 1920×1080, 25p, and edited in Final Cut. I’ve recommended this film to my friends (and I wasnŌĆÖt embarrassed at all).