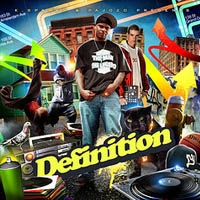 K. Sparks is a rap artist, music producer & lyricist all in one. “[He] truly embodies the term “Real Hip Hop”. With his passionate tone and sincere lyrics, it is very clear that he is destined to be one of Hip Hop’s future stars.”

K. Sparks always been involved with music. As a child, he used to listen to his father’s jazz band rehearsing in their apartment. Writing became K. Sparks’ focus during his teenage years: “I would write lyrics in my classes… by the end of the day I would have about 5 songs” says K. Sparks. Born and raised in Queens, NY, he quickly learned the value of hard work, dedication and determination and actively started building his career.

The Free Album
“Definition” is a collaborative work of K. Sparks & Pajozo. K. Sparks wrote almost all of the songs, while Pajozo produced and mastered them. All tracks were recorded at K. Sparks’ Double Up Entertainment Studios in NY by Big Drew & Dave Barz. K. Sparks wanted to release the “Definition” album free and under Attribution-No Derivative Works Creative Commons License to thank his loyal fans for the continuous support and to allow his music to be heard by more people around the world. Share & enjoy the freebie.