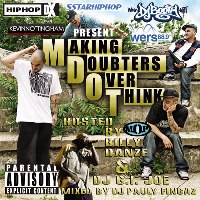 After only four months since his last release (‘Money Doesn’t Own Thought’), Hip Hop artist, M-Dot is back with a brand new album, ‘Making Doubters Over think’. I have to admit that I rarely listen to this genre of music, however I have thoroughly enjoyed this album. It comes as no surprise that M-Dot is the winner of the 2010 Boston Music Awards “Hip-Hop Artist of the Year” and winner of the 2010 Boston Phoenix “Best Hip Hop Act”. To put it bluntly – this dude is bad-a**. These titles are well deserved and his talent clearly shows in ‘Making Doubter’s Over Think’.

Each song on this album has its own distinctiveness and character. If I had to choose a favorite, it would have to be the remix of ‘I’m ILL Russel’. And if it comes to this song, catchy is an understatement. It has been stuck in my head for hours now and its chorus has run as a loop in my mind; I’m ill and this song is contagious. Layer-wise, a lot of work has gone into it and not one layer can be labeled as unnecessary. The song has an awesome drumbeat which heavily uses an old-school sounding snare with an echo-like effect and an emphasized bass drum. These then complement the rhythm of a lyrically genius vocal line.

Any fans of ‘Real Hip Hop’ or even those who enjoy it from time to time, should certainly download this album because it provides 24 tracks of quality and it is exceptionally thoughtful. Additionally, it is catchy and highly original. M-Dot promises a solo album in 2011 and this album will have to tide you over until then!