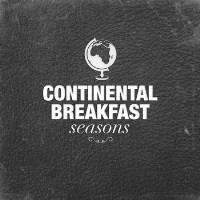 Seasons by Continental Breakfast jangles on with catchy beats, a dirty New York post-hipster sound and lovely vocals. This compilation comes with six, mostly upbeat, tracks. It was released back in December 16, 2010 and features a strictly Brooklyn indie rock sound.

Although the record feels like it was recorded in a basement or garage somewhere, this does add to the appeal of the album. It’s like being in an underground rock club where all the cool people hang out. Infusing rock, alternative, garage and a bit of punk, these Brooklyn natives certainly have something up their sleeve.

Welcoming your ears with Season, this rock infused number perfectly opens the record with its punchy beats and catchy melody. The vocal work is amazing and it’s hard not to be jiving along or doing the hand claps when you hear this song several times. It’s one track worth checking out on this record.

We’ve Got It Good features a touch and go, almost cowboy-Western feel to it. It makes me want to grab a partner and start dancing for some reason. On the other hand, Maybe, has a lovely tempo and beat. It’s also catchy and the vocals remain a dominant proponent in the “like” factor of the song.

The guys take turns singing vocals for the songs and this adds a nice touch of diversity to the feel of the songs. Continental Breakfast is a cool band worthy of space in your music player. Give this short EP a download right now.