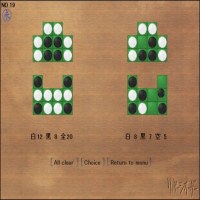 Looking for a non-typical puzzle game? Reverse Order can become a real treat if you’re up for the challenge.  The game is actually a variation of the timeless board game, Reversi.

The original game sees players fighting to see who could turn over as many pieces from their opponents. Typically, players choose which side of the pieces they prefer and they take turns trying to turn over their opponents pieces.

In Reverse Order, players will take turns placing pieces on the board in an attempt to turn over their opponents piece. In addition to that, players will have to match the pattern given on the left side of the screen. Whoever, manages to do this, wins the game.

Reverse Order might seem like a simple game but it’s highly entertaining. The combination of the regular Reversi gameplay along with the added element of the pattern puzzle makes it quite interesting to play. Players are given the freedom to choose whichever level they want to play. Once puzzles have been solved, they will be marked with a color blue Japanese character instead of the usual red.

To make it more interesting, there’s also a level editor provided so players can easily raise the challenge factor for the puzzles. Despite being a very simple game, it’s very engaging and ensures plenty of fun times ahead.

First time players would need to solve by trial and error but once they get the hang out of it, the rules are quite simple to follow. There are about 55 puzzles that they can try and solve. Some of them are easy while others could take up a bit of time. Overall, the game is perfect if you’re looking for something to pass off the time.