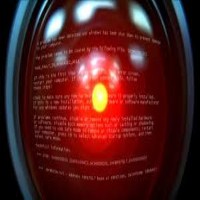 Ever wonder what it’s like to be facing the infamous antagonist in one of the most celebrated science fiction stories of all time? I’m talking about the sentient on-board computer in, Arthur C. Clarke’s Space Odyssey, HAL 9000.

Finally, plenty of sci-fi geeks are getting a chance to have their own sentient, “evil” computer right on their very own desktop. For those who are familiar with the film or the books, this one easily helps kickstart the imagination and lets users play pretend on what it must be like to become an astronaut on your way to the biggest planet in the Solar System. Having that red eye camera lens from your screen definitely brings its own category of cool. Give it a download.

The HAL 9000 has gained a place in popular culture thanks to the wonderful Space Odyssey books and films. HAL or the Heuristically programmed ALgorithmic computer is the main computer that interacts with the crew in Discovery One. He mostly shows up on screen in a representative red eye camera lens and is equipped with all the possible knowledge any artificial being can have. From lipreading, art appreciation, speech and facial recognition as well as interpreting complex emotions and reasoning, the computer pretty much knows everything.

This comes on top of the fact that he is programmed to run the entire Discovery One on its mission. Of course, what makes him even more celebrated is the fact that he’s the main antagonist in the movie. In fact, he’s included in AFI’s 100 Years…100 Heroes and Villains. He ranks at number 13.

The screensaver itself started as an animated wallpaper back in 1999. It wasn’t until June 2006 when it first went online as a screensaver and since then, has become quite a hit with fans and non-fans alike. It features all the basic look of the computer. Visiting the official website gives you a brief overview of the story if you are not familiar with it. Overall, the screensaver not only looks but works great.