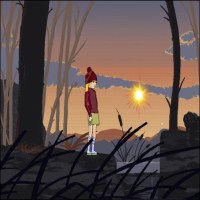 One Curious Nightfall is a short but very interesting game that’s coupled with one awesome soundtrack. The game is beautiful and definitely worth checking out and experiencing for yourself.

In the game, there are several rooms that you need to explore, with each room holding a surprise of its own. Gameplay is quite simple and the graphics is 2D but it’s still pretty amazing. It’s a bit short so don’t expect to get too attached with the game since it might be over even before you start getting a feel for it.

The game lets you play as a young girl who discovers a small pouch and goes on an adventure. She must return the pouch to its owner, the Bird King. Although the game offers about 30 rooms or so that players can explore, there’s very little gameplay. In fact, players can probably breeze through the game in as little as 15 minutes.

Even if you are not in it for the gameplay, the flawless animation is worth checking out. Moreover, the soundtrack is simply stunning. It was recorded especially for the game by Flashygoodness, who also worked on the soundtrack for Tower to Heaven.  You can download the soundtrack separately via BandCamp. It’s available for a small donation but you can also download it for free by placing zero on the donation amount.

Overall, the game is pretty charming. It’s simple and beautifully done . Certainly worth checking out if you’re trying to kill a few minutes.