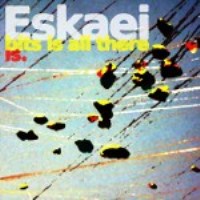 Eskaei: Bits Is All There Is

Eskaei is actually the one-man crew of Stefanos Kourtis. This talented artist has been making his own mix of eclectic electronic hip hop; skilfully creating a lush soundscape filled and inspired by hip hop music.

Stefanos is also the brainchild for netlabel, Memory Format. He started it around 2006. He has released several songs as well as compilations using different monikers in various netlabels.

As Eskaei, he focuses more on his love for “electronically generated sounds”, creating a wonderful hodgepodge of elements that are both pleasant, complex yet easy to relax to.

Starting with the spacey sounding, Debrief, the song exudes a video game 8 bit sound that’s mixed with a super cool electronic dub. Flairy (The Mishap), on the other hand, brilliantly combines synths with a moody atmosphere. It’s like going through a dark tunnel and being enveloped in nothing but beats and sounds. One of those tracks you could easily get lost in.

The third song from the promo compilation is Fragmentation. Like the other cuts, the song flows seamlessly. It’s a track of exploration, letting listeners discover the various sounds that swirl through the song.

Even though the compilation is a bit short, it’s definitely worth checking out. All of the songs are pretty solid and resonate an amazingly cool vibe.

Eskaei has been making electronic music since 1997. He has also contributed to several other projects dealing with “sound production, including sound editing & mixing for TV, composition for theatrical plays and music making.”